I’ll make this race report sweet and to the point. The BMO Mesa-Phoenix Marathon (Marathon #4 for me, #1 for Alex). 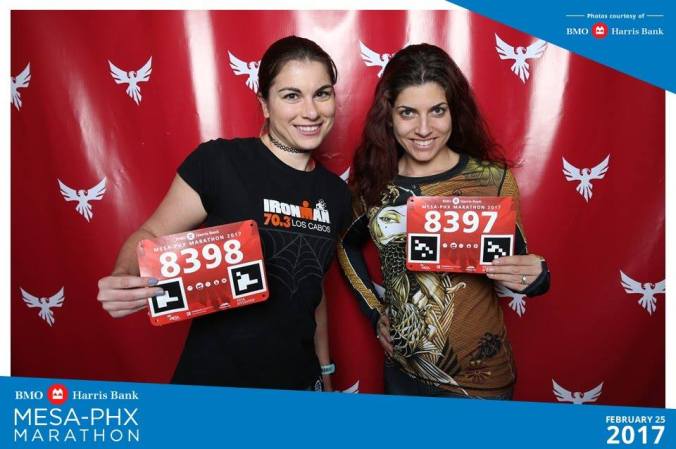 This was by FAR the earliest race I’ve ever started, and earliest I’ve ever gotten up for a race period, even ones I’ve traveled over 2 hours for I was not up THAT early. We got up at around 4:15am Saturday. It was hard with the time zone change and my bad habits of staying up later that week. The last bus to the starting line would leave at 5:15am, since it was a one-way race start to finish (Started in Phoenix, ended in Mesa). I checked the weather app, and realized it was currently 36°F, I did not sign up to run in my training conditions!! I thought it would be at LEAST above 45°F! It was going to be sunny…but the race started at 6:30am, HALF AN HOUR before sunrise! So we were going to be running in the dark? That’s a new one. With Ironman lasting until midnight, I knew I’d be running in the dark eventually, but now?! Anyway, we made our way from the hotel to the finish line area where the buses were. LOADS of traffic. And no signs as to what area the buses were in, or which bus went to which distance (there was a 10k bus and half marathon bus too). Very frustratingly, we made our way, got dropped off at 5:15am! (literally spending most of the time trying to figure out where to go once we were there), running around (literally) trying to find the right bus. We found the half bus, they pointed us in the right direction. We ran probably a good half a mile before reaching the right buses. It was FREEZING! I had planned on wearing a tank and shorts, thankfully Alex had brought me my extra long sleeve of the same shirt with her to the race for me. I ended up using that even if it DID warm up later. On the bus we warmed up. I think we were on the bus to the starting line for like 45 minutes! Long trip.

Once we arrived, about 6:00am, Alex wanted to use the port-o-potties before taking off. Understandable, so we got in line. What we didn’t know was that the line was not really moving much. We saw many take off into the darkness of the nearby desert to do their thing. The Bus driver had warned us to not creep out into the desert, saying there were “jumping cacti” out there. He was right! A poor soul came out of the brush with a cactus stuck in his arm the size of a pineapple. A girl was pulling the needles out, and he was trying to get a lot of cacti out of his shoes. Well, 6:15am came and went, then 6:22am, and then 6:28am, and then some fireworks! There was the race start. We missed it. We continued to wait, and with a lot of other people. We knew it was chipped timed, but never had I actually started a race without everyone else. Waiting for the johns, we added 14 minutes onto our “time”. Alex was totally chill though, so it kept me in the right state of mind at least.

STILL COLD, sun no where to be found, we made our way to the starting line, did a few pre-run stretches and dynamic exercises (very good idea), and away we went! We chatted up some fellow slow starters and joked around. First mile, 8:43….uuuuh, why. SLOW DOWN, Alex’s slogan for me the whole race it turns out. To be fair, the first 5k was all downhill, and the steepest decline of the race. We saw Seth, Alex’s hubby, shooting the race at mile 1.5. It was cool to see him and one of their friends near the start taking pictures for the race. Mile 2, 8:51…not good enough STILL. I didn’t feel like I was going very fast. My heart rate was low. I knew this would catch up with me though. Mile 3, 9:06…doing better? At least the sun was starting to rise. 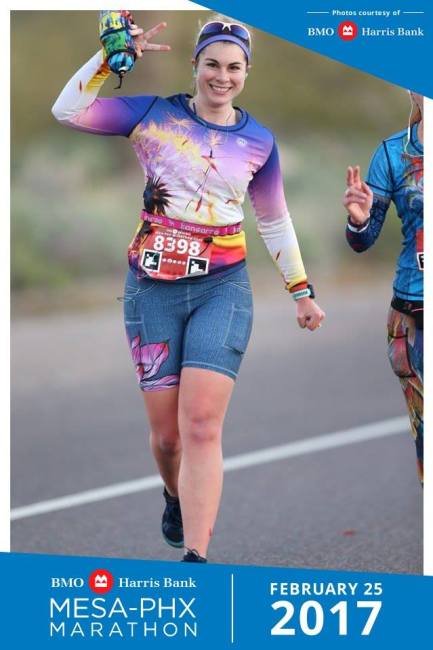 Mile 4, things got more real. The first 4 miles went by like the blink of an eye, quite honestly. Mile four started the 1.75 mile climb, very steady and seemingly endless. Mid 9 minute pace, this was good. I was ok with that. Still way faster than I trained and almost matching my best half marathon pace. Still need to slow down. I really tried Alex, I did! Walking through aid stations helped a little I think. Aid stations every 2 miles though was pretty daunting to me. I really need on at least every 1.5 miles. But adding that bit of info to things I need to keep in mind. The nuun in my bottle kept me at bay.

10k in, I *almost* matched my PR for, around 57 minutes (my PR is 56 minutes). Still cruising along 10 miles in, mostly sub 10 min/mi pace for mile splits. Still felt good, was still cold 10 miles in though, I could feel it in my legs. Half way point!! Coming in at 2 hours and 4 minutes, my 2nd fastest half behind 2:02, and ahead of 2:10, quite substantial given this was a MARATHON. Wake up call, go slower please! I was finally warming up, sigh. Mile 15 is where it hit Alex mostly, pace dropped off finally. A lot of mystery things happened, like side stitches and cramping, that we couldn’t manage to get resolved. Legs were good to go, but pain is hard to ignore when it’s not muscle fatigue related. From that point on, it was REALLY FLAT, I mean, the course was advertised as “all downhill” but in reality, there was a pretty long climb at the beginning, and once you reach about half way, it’s just very very flat, maybe like 7 feet of decline per mile or less. Mile 23 or something was even at an incline actually (like 7 feet or something). For those of us who don’t practice on flat straights, this is hard on the muscles.

On my end, I was feeling good, like really good. Usually for me, miles 15-19 are a nightmare. I’m usually pushing through when I really don’t want to, and every mile feels like an eternity. Not this time around. I have more faith in my training now even though I didn’t get in any super long runs beforehand. I do not leave Alex for any of this though. My goal was to get her to the finish line. I kept hydrating though, noticing that it was getting warmer outside and I could tell I was wearing a long sleeve shirt. I was lucky it was long sleeve in that I did not get sunburned. I also avoided under arm chaffing. One of the things I did NOT think about was the lower humidity, I think it was around 18% that day, and I had not trained in that kind of condition since May last year when I was in New Mexico. At least I had some experience with this. I knew you had to drink even though you don’t feel yourself sweating, it all evaporates. I think this little memory saved me.

Running into mile 23, I started feeling heavy in my legs every time we went from run to walk to run again. If I had not walked, I would not have felt so heavy I think. I knew this is where doing a longer run would have helped. It didn’t bother me too much. Mile 25, one more mile left, we decided to push it to the end a little more, less walking. Ended up with 10:30 pace for that one, and last 0.15 miles we went harder (9:05 pace average for last 0.2 miles). I was super proud of Alex digging deep and going at the end. I did NOT touch my garmin until after I knew pictures were taken at the finish, I am always hitting that stop button asap, but this time I waited. I knew I’d PRed my marathon time by half an hour, so a few seconds didn’t matter too much. Clocked garmin at 4:36:00 exactly at 26.21 miles. 4 seconds off from the chip time which was 4:35:56. Not bad at all. Big hugs at the finish line. I was happy it was over, and a few hours later, realizing again that I like running marathons over half marathons. 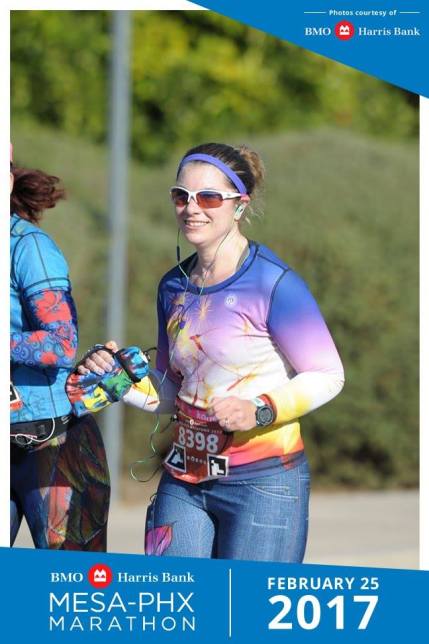 I can’t say much about the finish line food, I am NEVER hungry after a race of any kind or distance (although I am always hungry after swimming, which is always been a mystery to me), I just can’t stomach it. Apparently it was plentiful and good. The race itself as it was run was just OK in my opinion, nothing spectacular, nothing really stood out to me that would call me back to do it again. Racing in Arizona itself was nice however, which now knocks that state off my list of states I’ve raced in. I assume Nevada and New Mexico will be similar, although I don’t know if I’m counting New Mexico since the first two races I’ve ever done weren’t really races but just “runs” that were supported with a t-shirt and 2 aid stations (first two half marathons as well!).

Lastly, I guess I’ll say again, congrats to whoever made it this far again, and apologize for saying this was going to be short and sweet…the memories tend to flood back while I’m writing and I’m too lazy to scroll up and fix what I wrote. Now onto training for the rest of my BIG year of 2017, next up to bat is the Blue Ridge Marathon (on year 3 of this one, hoping to get sub 5 hours I think is a good goal!), and on-going training for Ironman Wisconsin. 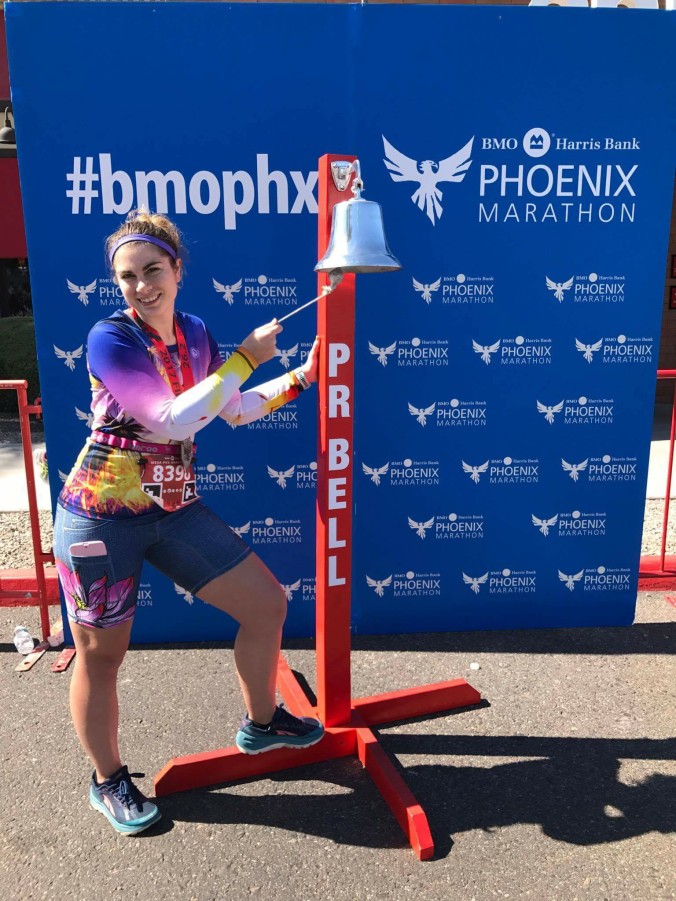 Honey cat visitation. #catsofinstagram #cat #cats #ragdoll #pets #pet #catstagram #cats_of_instagram
In 2019, I made 28 mountain summits, and 14 were unique ones. 2020 is here, and the mountains are calling. What's on the plate? Georgia Death Race Blue Ridge Marathon Promise Land 50k (wish list!) Ironman 70.3 Blue Ridge Epic training coming your way. #running #optoutside #stairmaster #run #mountains #virginiaoutdoors #virginia #virginiaisformountainlovers #blueridgemarathon #roanokeoutside #run540 #trailrunning #trailrun #trailrunner #ultratraining #marathontraining #wisconsinwinter #transplant #trailsetter #ornerymuleracing #teambu #altrarunning #inknburn
You gotta be yourself. Test run today with some of my trail sisters, @loribeske and @kapora.the.explora in 5 degree temps! 90% success after last weekend's fall and lingering knee pain from freight train 100k last month. Snow is hard work to run in. Onto Georgia Death Race training and more flat lander mountain workouts. @altrarunning #running #snow #snowrun #run #trailrun #trailrunning #trailsisters #altrarunning #trails #workout #fitness #motivation #optoutside #teambu #training #imissmountains #runblueridge
Frozen Gnome this past weekend had my with my leg snapping back before I even hit mile 11. I struggled through nearly 19 Miles before I gave up the ghost. 2nd DNF but not without more valuable lessons taken in. My feet are finally back to normal! My layering was really good. And the state of my fitness was solidified and now, as soon as I'm 100% again, back to training for the big boys this year. The cold does hinder my performance, so I'm taking it with a grain of salt. More updates to come soon. #running #run #teambu #ornerymuleracing #frozengnome #ultratraining #ultrarunning #trailrunning #trails #optoutside
Need more January Wisconsin days like this. A solid easy 9 in the books with hills. 45 degrees! Frozen Gnome 50k in a week! #altrarunning #inknburn #longrun #taper #running #run #garmin #wisconsinwinter #runwisconsin #wintertraining #optoutside #hillworkout #fitness #runstreak #orangemud #ornerymuleracing #teambu #ultratraining
My local @trail_sisters group run went from small to many tonight as we did a daylight run and back to back night run. So proud of these ladies!! 3.5ish miles to 8 miles tonight. #running #trailsisters #grouprun #local #wisconsin #endof2019 #run #trailrunning #trailrun #madisonwi #uwarboretum #runtogether #fitness #training #community

Countdown to A Race